The scene was already looking ugly. If two goals on six shots less than three minutes into the hockey game wasn’t bad enough, the third goal, coming off a John Tavares wrist shot while cutting towards the slot from the right circle, with a hobbled Jimmy Howard struggling to get back up to his feet certainly felt like the low point of the 6-0 loss the Red Wings suffered on Wednesday night. Maybe even of the entire season to date.

That, or maybe the coaching staff having to drag a sick Jonathan Bernier onto the ice so that the emergency backup wouldn’t have to play the remaining fifty-seven minutes of the game. Which might just be the epitome of this disastrous season.

The length of time Howard will be sidelined has not been disclosed as of this writing, however, the team did move him to injury reserve Friday afternoon. Not a good sign.

No matter, this setback could not come at a worse time for the long time Red Wings netminder. At 35-years-old, Father Time may have finally caught up with the Syracuse, NY, native.

In 14 starts this season, Howard boasts a .887 save percentage, a dreadful mark for an NHL goaltender. When in net, Howard has conceded 3 or more goals in 11 of those 14 starts. For a team averaging just 2.19 goals per game — easily dead last in the league — wins are going to come few and far in between. Which is why Detroit’s margin for error is so razor thin, as evident by their putrid 7-17-3 record, good enough for last in the NHL.

With just 2 wins on the season, Howard has lost the ability to steal games. Now, the defense hasn’t done him, nor Bernier any favors. A D-corps consisting of Dylan McIlrath, Madison Bowey, and several other replacement level defensemen is not exactly a stout defensive group. On paper, they might just be the very worst in the league.

The same may go for their underlying numbers as well.

In all situations, the Red Wings have allowed the fourth most expected goals against per 60 minutes (2.98) in the league. Looking at their defensive zone heat map, play at 5-on-5 is surprisingly not as bleak as you would expect. Its on the penalty-kill where they’ve gotten blasted. 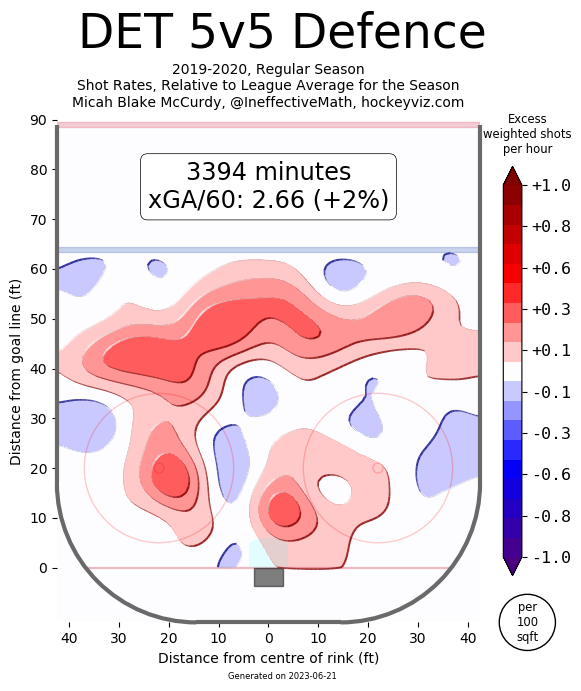 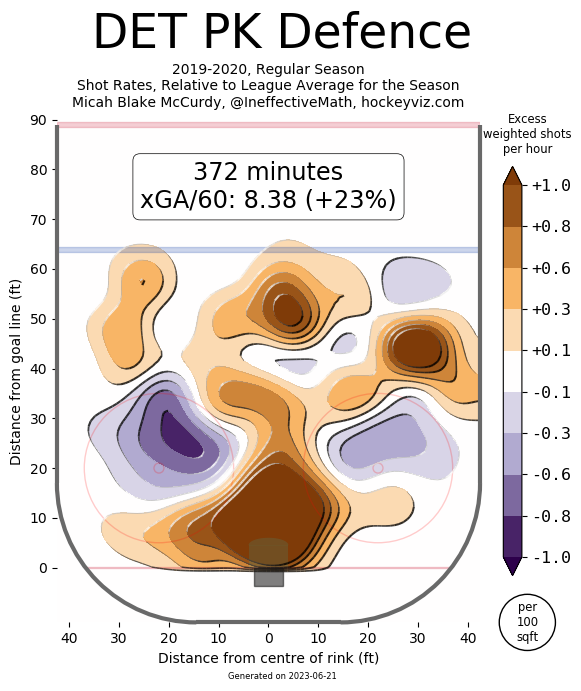 No matter how the chances against are coming, the Red Wings have had poor season defensively, something out of the control of Howard and Bernier. In years past, Howard was able to overcome the adversity and give Detroit legitimate number one goaltending. During the peak of the Petr Mrazek era, Howard won back the starting job by reinventing his game, playing deeper in the crease. With Bernier now being favored by head coach Jeff Blashill as the go-to guy, it appears as though Howard is trending in the opposite direction this time around.

And it does seem like Bernier is becoming the lead horse. The 31-year-old has started 16 games, including a stretch of four in a row. It seems Blashill gives the nod for back-to-back starts if the goalie in question won the previous game. So, theoretically, if healthy, Bernier and Howard would both probably fall in the ballpark of 30-40 starts each by seasons end. But with Bernier playing better hockey overall, #45 might earn some extra playing time. Now, that’s not to say Bernier has been exceptional this season, but he certainly has performed better than Howard.

Which really makes this a worst case scenario for Howard, who is in a contract year. With Bernier locked up for one more season after this one, Steve Yzerman will be unlikely to bring back Howard on any sort of market value deal. Too much money is already locked up into declining veterans.

There are much better alternatives to look for as Bernier’s partner next season. Ones with greater upside than Howard. Calvin Pickard, who was called up earlier this week in replacement of the injured Howard, could be a worthwhile avenue to explore. Alexander Georgiev might be a possible trade target from the New York Rangers. Hell, even if the club wants to go after an unrestricted free-agent, there are much better options than Howard, such as: Robin Lehner, Jacob Markstrom, and others.

As upsetting as it is to say, seeing how valuable Howard has been to the franchise for so long, cutting ties seems like the best decision for both parties. For the Red Wings, they don’t accomplish much of anything by re-signing him, and for Howard, he certainly deserves another shot at the Stanley Cup before it really becomes too late.