It was a significant and eventful win for the Canucks as two teams trying to buck their recent losing ways clashed in Vancouver. The Predators, owners of a two-game losing streak coming into tonight’s tilt, played a heavy but undisciplined game. The Canucks took advantage on the power play and snapped their 4 game losing streak over a team that provided a good test to a group that is looking to prove themselves after a brief skid.

The first period was a blur that may have seen 4 stoppages. It was uneventful on the scoresheet, but that changed in the second when the Canucks sparked the action off on a power play that opened the middle frame. Pearson found twine, but that was the only bright spot in the 2nd for the Canucks who found themselves bruised and outshot 19-7 in a period that the road team controlled.

Thanks to the reliable play of Thatcher Demko, the Canucks were able to begin the third tied 1-1. It looked to be a game that would come down to the wire, something the Preds wouldn’t mind, until both teams exploded for goals, resulting in the 5-3 final.

Next up, the Canucks will welcome the Stars, another tough Central division opponent, on Thursday when they look to start streaking.

Travis Green changed up each of his forward lines aside from the third, looking to spark a lineup that had struggled to score over the past few games. The most notable changes came in the top six as J.T. Miller was moved to Bo Horvat’s line while Josh Leivo took a turn with Elias Pettersson and Brock Boeser.

Prior to this one, Jay Beagle was listed as questionable and ultimately sat out with an undisclosed injury. Adam Gaudette started in his place between Schaller and Eriksson.

The pairings on the back end remained the same, while Demko got the start.

Tanner Pearson rips one home after a sweet deke at the blue line pic.twitter.com/RUXDh9lszm

When @_EPettersson blew out his candles, he wished for a goal tonight. And voila!

Elias Pettersson buries his second of the game pic.twitter.com/T4p4AWctw7 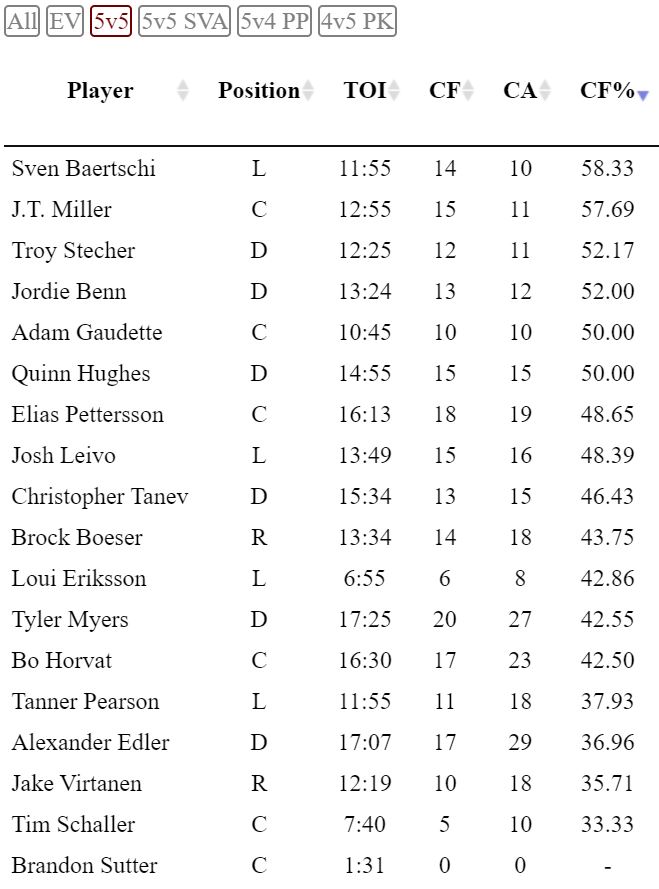