The Red Wings are heading out to Long Island for a quick road game with the Metro Division’s New York Islanders. Tonight’s venue will be the famed Nassau Coliseum, where the Islanders won an NHL record 19 consecutive playoff series in the early 1980s. After the game the Red Wings will return home for a back-to-back on the weekend.

Coming into the contest, New York has dropped their past three games, including a 6-2 thumping at the hands of the Rangers on Monday night. The Red Wings themselves will be looking to get off the snide, following a brutal 5-1 loss to the Sabres on Sunday.

There were some injury scare from the last game, but all those questionable are expected to play. Dylan Larkin, Frans Nielsen, and Patrik Nemeth have all been confirmed by head coach Jeff Blashill as good to go.

Missing in action, however, is Jonathan Bernier, who is expected to be sidelined until after the all-star break in late January. So Jimmy Howard is the presumed starter with Calvin Pickard as his backup.

The total has gone UNDER in 5 of Detroit’s last 7 games. – OddsShark.com

The name of the game for the Islanders is defense. Under Barry Trotz they’ve developed into a defensive stalwart, which is largely how they’ve gone 27-13-4 with a mostly poor lineup on paper. The players have bought in and it’s worked, showing a major difference in their defensive play from before Trotz took over.

A player of note to keep an eye on: Noah Dobson. The 20-year-old defenseman hasn’t seen too much ice-time this season, but he is a highly talented blue-liner on the verge of taking the next step.

These two teams met back in Detroit on Dec. 2 and things did not go the Red Wings way. The club lost 4-1 despite out-shooting the Isles 31-25. That’s a testament to how well New York limits high quality chances. Semyon Varlamov stood tall in net, turning away 30 of 31 shots.

In the game, Detroit’s only goal came on the powerplay. As a whole, they went 1-for-6 on the man-advantage. They’ll need to perform better when those powerplay chances come if they want a chance to win.

The strange thing when it comes to the Islanders is the amount of shots they give up compared to goals allowed. Despite being in the lower half of the league in shots-against per game with 31.5, they only allow 2.64 goals per game, the fifth best mark in the league. 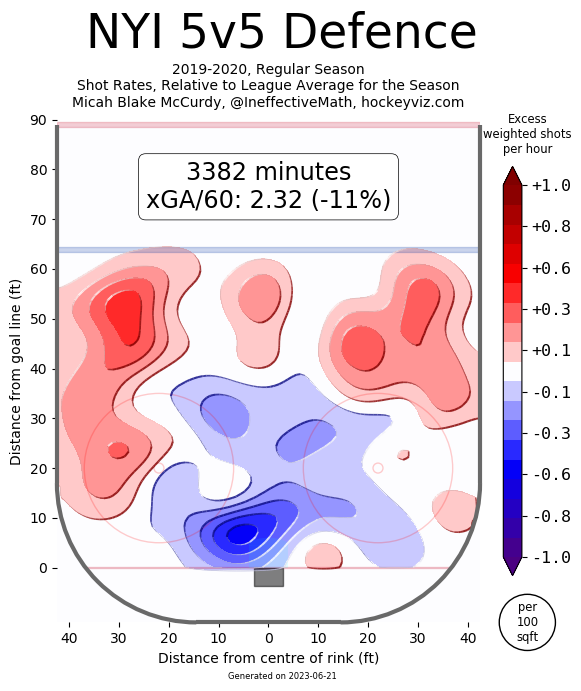 As the chart above from Micah Blake McCurdy displays, the Isles give up so few high quality chances. Their sacrifice of quantity over quality has done them well, which is why they give up so few goals. For a team like the Red Wings, who struggle with both quantity of shots and quality of shots, this appears to be an unfavorable matchup.

Filip Hronek has been thriving as of late. The Czech blue-liner has 6 points in his last 8 games and that still doesn’t seem indicative of his play. In a big minute role, Hronek has transformed into Detroit No. 1, go-to guy on the back-end. He was recently moved up to the top powerplay unit as a promotion. Quite impressive for a 22-year-old.

While we all know Hronek is a key piece to the Red Wings future, to see him take the next step now is huge. Since Danny DeKeyser went down in October, the Red Wings were missing a true leader to the group. Hronek is filling in that role tenfold.